As luck would have it, Faith suddenly appeared and strolled into the clearing. With a pleasant smile she greeted both Wonder and Virtue and stated, "Heard Wonder is experiencing some confusion."

This caused Vi to break out in laughter. "Might just be the person trying to explain it to him, Faith."

Wonder shook his head and piped up, "No, it's true. I don't understand. Everyone seems to have different ideas of what God is, or how we should act, and what to believe. How am I suppose to know which one is right?"

"Believe in the process Wonder." With that she winked at Vi and continued on her way, whichever way that was. Faith like to find her own path.

Wonder's glance at Vi was dejected. "I don't know what the process is, Vi."

Virtue studied him for a time before saying, "Wonder, do you know the men of science say that there has never, ever, been two snowflakes alike? In all the snowstorms, in all the world, since time began, no two snowflakes have been identical. Does that seem possible?"

"And what happens when thousands upon thousands of snowflakes fall in a specific location?"

Finally! Something he knew. "Snow, Vi."

"Indeed! The uniqueness of the individual snowflake is lost--it becomes homogeneous. It loses itself in something larger, and, some would say, greater. But that isn't the end Wonder, not by a long shot. Most snow eventually melts and becomes water. It soaks the soil to nourish verdure, or finds a stream to slake a thirst, or seeks solace in the anonymity of the ocean. Wherever it goes though, evaporation and transpiration take place--or sublimation if it hasn't melted--and it will, eventually, find itself lifted skyward to form a cloud. Guess what happens then Wonder? The PROCESS starts all over again! Be it snow, rain, dew, or fog."

"Look around, Wonder, and ask yourself, 'why not?' God wants you to know Him. She didn't think that possible without revealing Herself."

"Wonder, God isn't a He, a She, or an It. God transcends gender. God is nothing--no 'thing.' God is everything. Every Thing! And the urge, the impulse, the desire to experience, is what God is up to. Or down for, as the case may be."

Just then Doubt crept in...
Posted by WPGrogan.blogspot.com at 5:30 PM No comments:

"Oh Vi, you're making fun of me," Wonder asserted. "How am I ever going to figure things out if you keep teasing me?"

"Well Wonder, it is important to maintain one's sense of humor when talking about the Deity," Virtue insisted. "Did you know the Lord goes around introducing Himself as Al?"

Virtue struggled to maintain a straight face saying, "Yes He does Wonder--Al Mighty! In fact He insists his full title is, 'Good God Al Mighty.' "

Wonder bit his lip and looked at Virtue with reproach. "Vi, you blaspheme."

Virtue glanced at Wonder with kindness. She gently took his arm and said, "lets sit down for awhile Wonder," and led him off the trail to a small glade. Once they had settled in, Virtue asked for his undivided attention and told him the following story:

"At the beginning Wonder, the Lord of Creation said to the Lady, 'with everything We have fashioned, how are We going to keep Our shit together?' (here Wonder gasped yet again) The Lady, with only a slight raise of an eyebrow, suggested there might be a less crude way of putting it, but that yes, definitely, Creation would produce large amounts of waste. Whimsy, who was there at the beginning and a vital component of the creation process, suggested that 'poop in a group' was more refined, and that he thought he had the answer--'shit kickers.' The Lady concluded this wasn't solving the problem of 'good taste,' insofar as terminology was concerned. Well, Whimsy was up to the task and provided an alternative; 'dung beetle'. But he asked that the beetle push the shit with his feet, no! no! with his BACK feet, head pointed the opposite way! As the Lady contemplated the idea, murmuring, 'perhaps a poo pushing beetle would work,' the Lord commented, 'how in the world are they going to be able to sustain a straight line?' Whimsy, by now totally enamored with his notion, said to make it so they navigate--steer--by stars million and millions of miles away. The Lord of Creation asked Whimsy 'why so grandiose?' to which Whimsy responded, 'to keep humans humble.' 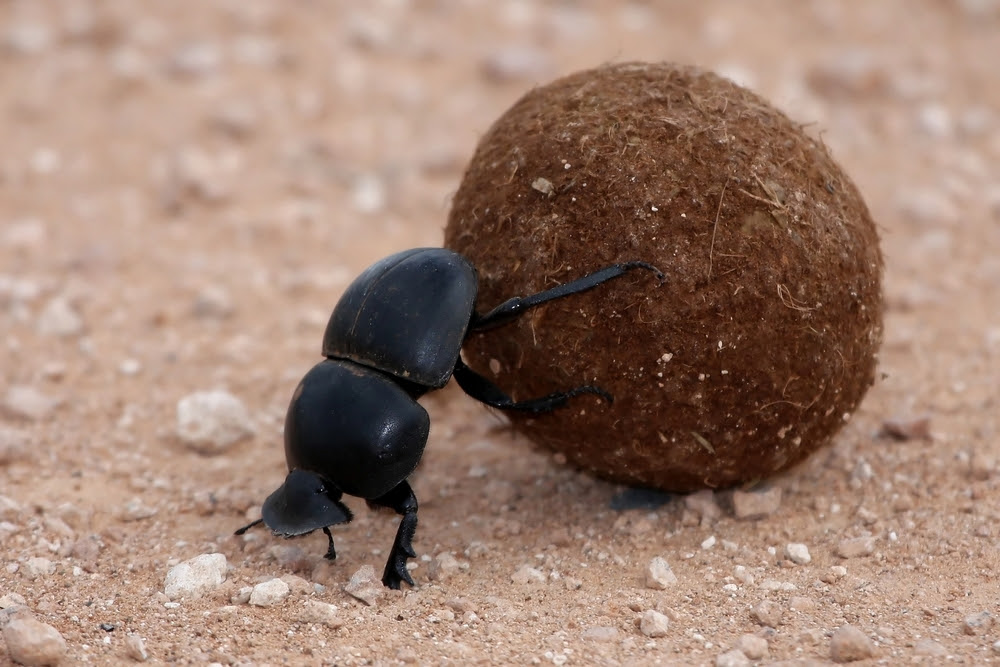 "Well, its the end of the point I am trying to share with you Wonder. Humans believing that they can 'blaspheme' is the height of arrogance. It would be as though an electron in your body was saying that YOU were illegitimate or counterfeit. The electron's existence is dependent on the very thing it would repudiate. It is inconsequential ignorance. The Lord and Lady care far less what you say as what you do. Remember that. Even if you are no more than a poo pusher."

[ image courtesy of http://www.toptenz.net ]
Posted by WPGrogan.blogspot.com at 10:28 AM No comments: